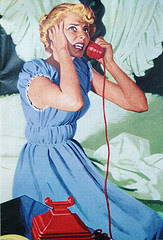 You know who those Drama Mamas are.  The ones where everything is a great big deal.  All of life is a major production - and they are the stars.  Constantly stressed to the max, every occurrence, every life event, every piece of news provides yet another stage for them to overreact.  The end of the world is usually at hand.

Every star has their own melodramatic bag of tricks.  Some love the off-the-charts responses.  Their gig is defined by loud, incessant moaning and groaning, the woe-is-me pity parties, the endless litanies of past hurts and injustices, occasional throwing of objects to make their point, and grand exits as they flounce out of the room, doors slamming behind them.

Others are more subtle.  The weight of the universe is on them, and they want you to know it.  Endless deep sighs and rolling of the eyes, impromptu weeping, the silent treatment, and sudden physical symptoms that erupt out of nowhere are all designed to capture sympathetic attention and manipulate those who hold court around them.

Somewhere along the way, and often unconsciously, the drama queen realized that commotion, confusion, and frenzy were her friends, handing her the attention that she was not able to get in more legitimate ways.  Even negative attention was better than no attention at all.  Raising the roof worked for her and she stuck with it.

And then there were the enablers who allowed the productions to continue unabated.  They made excuses or covered up or prevented natural consequences from kicking in.  And in doing so, paid her to continue her grand performances.

Truth be told, the every-minute-is-a-trauma lifestyle gets old after awhile.  What was cute or entertaining as a child has long past run its course.  Even the leading lady gets tired, and longs for the show to be cancelled.  The audience gets restless and bored, and heads off to find a quieter venue or less exhausting entertainment.

Two events turned Heather's propensity for drama upside down.  And Miss Minimalist gives us 10 pointers that hit the nail on the head.

In the end, the whole drama queen thing is not simply an emotional problem.   It truly is a spiritual malady.  For some reason, the Holy Spirit hasn't been invited to take ownership of her exhausted, wounded soul.  There is little or no 'love, joy, peace, patience, kindness, goodness, faithfulness, gentleness and self-control' residing in her heart {Galatians 5}.  And it shows.

Jesus patiently, graciously beckons.  He longs for His weary and broken daughters to learn from His gentle and humble heart, and to find rest, healing, and release from their oh-so-heavy burdens {Matthew 11:28-30}.  Only He has the ultimate power to give supernatural peace and a healthy perspective in the midst of life's storms.